You may have seen it on the news, or heard about it in passing, but this virus was widely feared in 2009 for its effects on the real world. As the lines between the physical and virtual become blurred, so do the effects of virtual attacks. Stuxnet worked by attacking the software of industrial systems. In practice, it was used to cause centrifuges in an Iranian uranium facility to spin out of control and self-destruct. The possible physical applications of this virtual virus is what made it top of this list.

By making its way onto thumb-drives, this virus installs software onto the target computer and steals data from its system. Its most notable target was, in fact, the Pentagon. When it was discovered on their systems in 2008 they prohibited the further use of thumb-drives and subsequently, the U.S. Cyber Command was created.

In 2003 this virus wreaked mayhem on various servers by releasing packets of disruptive data. The servers it attacked weren’t harmless, either; it brought 911 services down and even had an impact on the bank of America.

PosionIvy is every computer user’s worst nightmare. Once installed, this piece of software enables the perpetrator to access all aspects of your system externally. It’s known, in the business, as a remote access trojan and the damage potential is endless. The hacker can use your webcam and audio recording devices, change passwords and easily access confidential information. This virus, too, has been used to launch damaging attacks in the professional sphere, hitting Western firms in 2005.

This computer worm emerged circa 2009. A remote access trojan itself, it attacked millions of machines. The interesting thing about the conficker virus though, was that it was never used for any malicious purpose. It was wide-spread and the damage potential was immense but luckily, nothing ever came of it.

Now that you can see the damaging potential of computer viruses, you can see how important virus removal services and IT support services are. With these sort of programs out there, why wait? Protect yourself today.

Can my Mac get a virus?

3 simple fixes for common IT problems 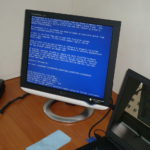